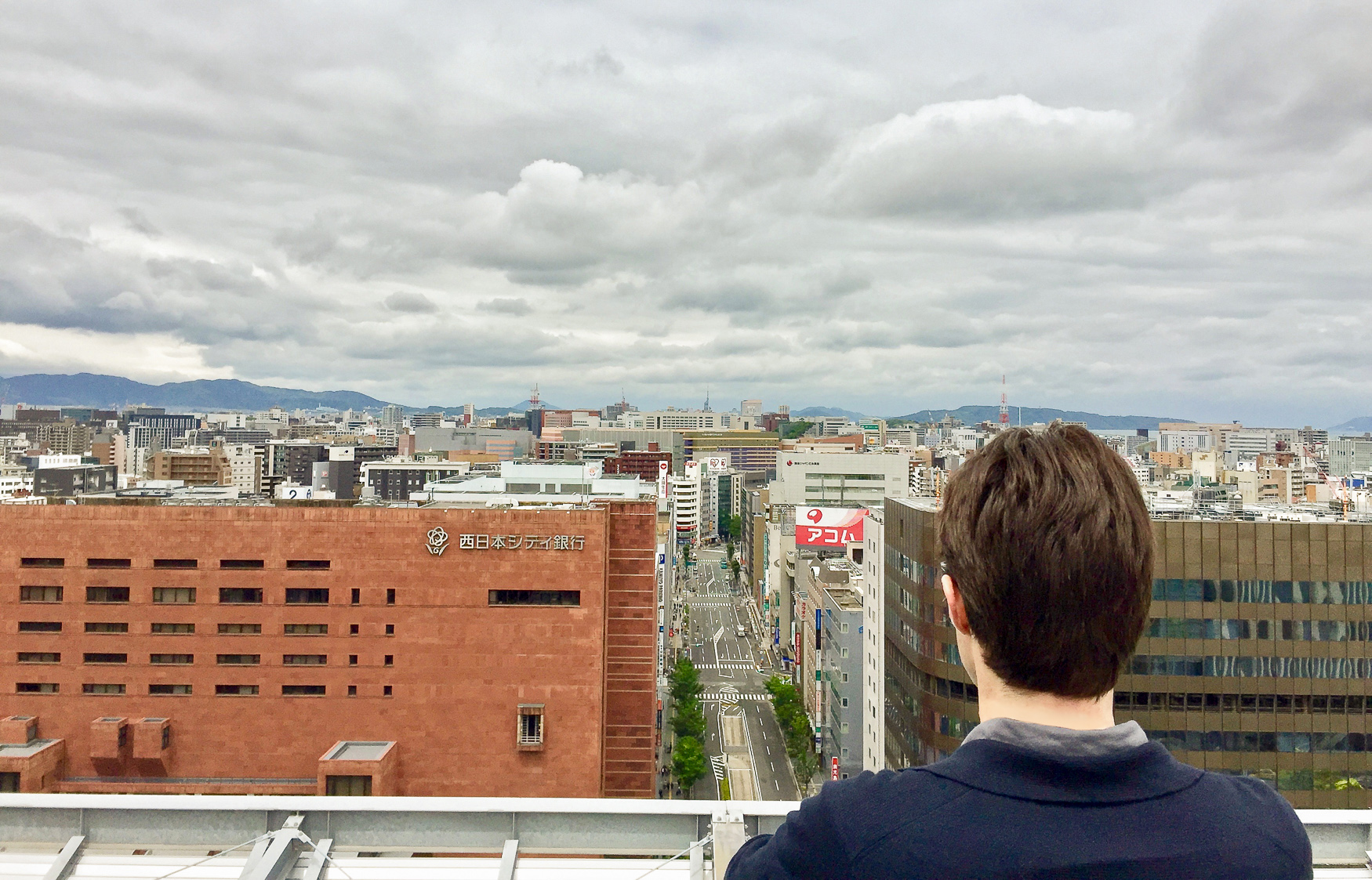 When traveling to Japan, the most obvious places to go are Tokyo and Kyoto. One is the bustling metropolis of the future, while the other is steeped in history and tradition. While both cities are definitely worth a visit, you should quickly add Fukuoka, Japan to your itinerary.

This modestly sized city has some of Japan’s best food, an airport that’s a quick train ride from the city center, and it’s a short train ride from world-renowned hot springs and natural beauty.

Let’s start with the food:

1.) Ramen is the most famous food in Fukuoka, Japan

Food-wise, Fukuoka’s claim to fame is their ramen. While great ramen can be found all over Japan, Fukuoka specializes in a thick, creamy, pork-based ramen, called tonkotsu, that has spread around the world. Two now famous ramen chains, Ippudo and Ichiran, play a large part in this, but they are just a sample of what you can find in Fukuoka. You could easily spend months just trying the different varieties of ramen here.

Different restaurants make their own special version of tonkotsu broth that varies dramatically from one place to the next. Some are on the lighter side, while others are so strong that you can smell the restaurant from down the street. Some aim for maintaining tradition, while others go for improving it with better ingredients or better broth.

You’ll probably want to try it all… but, never will. There are just too many.

Although ramen is most famous, it’s not the only noodle in town. Fukuoka also has some of the best udon you will ever try. In fact, many locals prefer udon to ramen—which can be very heavy and salty. There’s not the same level of competition with udon, but you can find it on many menus and there are a handful of specialized udon shops that make their noodles from scratch.

Just like ramen, Fukuoka has a distinct style of udon compared to the rest of Japan. Rather than cooking the noodles until they’re firm, they go in the opposite direction and cook them until they get soft. This often catches Japanese tourists by surprise, but many come to love this unique style.

Another local specialty is deep fried burdock root, which is often as big as your face. The root is cut into pieces, battered and fried in the shape of a circle. It strikes a great balance between a mild taste and a little crunch.

We found a handful of great cafes soon after we arrived that were similar to other third wave coffee shops around the world. They have very high-quality beans brewed to order and served in a well-designed space.

Now that we’ve spent more time exploring Fukuoka, we’ve discovered many smaller coffee shops that are hidden on side streets and in residential neighborhoods. They have a different atmosphere, more like the traditional Kissaten than a modern cafe. Kissaten means Japanese tea room and when coffee culture grew in Japan after WWII, this was the only place to get it.

Kissaten means Japanese tea room and has been around for centuries. After WWII, the coffee culture grew in Japan and these tea rooms added coffee to the menu. For many years they were the only option. But the coffee culture has been expanding recently all over the world and much of the equipment being used comes from Japan.

Fukuoka’s most famous example of this is Cafe Bimi, which roasts their rare beans in the store and brews coffee with the traditional nel drip—a brewing method that uses a cloth filter to slow brew a single cup of coffee. The owner trained in Tokyo before opening his own shop and slowly perfecting this brewing method. This is a very meticulous process but produces one of the best cups of coffee you’ll ever have.

Beyond the food itself, Fukuoka stands out as a good value. If you’ve ever found a restaurant with ridiculously good food for a price much lower than you expect, you know what we mean. You will have that experience almost constantly.

Let me give you an example. We stumbled upon a fish restaurant that’s known as one of the best places in the Fukuoka for mackerel. They’ve been serving it for decades and perfected the whole process. They buy the best local fish and serve a set lunch menu with an appetizer of fresh, chilled tofu, rice, miso soup, Japanese pickles, tea, and nearly a whole fish for less than $9USD per person.

When we compare it Tokyo, you can generally eat out for much less without sacrificing quality. Megumi can’t believe how much less expensive things are compared to what she’s used to.

When I compare it to the US, the difference is even bigger. This is true throughout Japan, but especially in Fukuoka.

There are two major yearly festivals that take place in spring and summer, drawing a growing number of tourists each year.

The first, Dontaku, takes place on May 3-4 every year. It’s best known for the parade that goes all around the city featuring many floats along with marching bands and other attractions. There are also stages at different points of interest with many different events.

Hakata Gion Yamakasa is a Unesco World Heritage event that takes place in July. It features enormous two-ton floats placed at various points throughout the city and ends with a race carrying smaller floats through the streets.

The more we explored Fukuoka, the more we realized how many shrines there are. Virtually every neighborhood has shrines of different sizes. A few of them are especially large and sit atop beautifully maintained grounds.

The nearby town of Dazaifu stands out for having one of the largest and most elaborate ones in the area and can easily be reached by train. Beyond the shrine, the trip is worth it for the historical train ride and a walk through the rest of the town.

Fukuoka also has plenty of green space. Some of it surrounds the many shrines, but another great place to enjoy the outdoors is Ohori Park. This large green space in the middle of the city has an old moat from a former castle outside it and inside there’s a large pond with swan boats and plenty of koi fish. You can walk to the man-made island in the middle or just enjoy a picnic in a scenic location.

There’s also Fukuoka’s tower, which is the tallest seaside tower in Japan, that’s right next to a beach park, that while not nearly as impressive as Ohori is nice to visit.

The mayor has been working with the Japanese government to simplify the process of getting foreign startup visas and there is lots of support for people who want to start a business here.

In fact, an old elementary school has been converted into a center for startup culture and features all kinds of tools to help people. There’s free access to different types of advisors and advice, as well as many small businesses with offices upstairs. There’s a lab with access to different types of equipment, materials, and tools. Plus, it serves as a co-working space and has a small library.

This plays a big role in what gives the city it’s young, dynamic atmosphere. There are lots of cafes, restaurants, and unique shops that really make Fukuoka stand out as one of Japan’s most innovative cities.

We have stayed in a few different areas of Fukuoka and while there’s a great public transit system, we don’t use it very often. The reason why is that it’s the perfect size to get around on foot.

Unless you are really far out, you can probably walk to one of the central districts within a half-hour. If you’re staying in Tenjin, Hakata, or a nearby district, walking is even quicker.

As much as we love larger cities, like Tokyo, the ease of getting around Fukuoka is really convenient—and a great way to stay active when eating so much ramen.

So far, we have been focusing on what makes Fukuoka stand out as a city, but to end this we want to focus on something that goes beyond the city itself.

I’m talking about the areas surrounding it. Within two hours you can reach Yafuin, Oita, and Beppu. This is one of the best places in Japan for hot springs. It’s also home to many farmers, which means lots of extremely fresh food.

A little further and you reach Kumamoto and Takachiho. There’s fantastic hiking, plenty of onsens and natural beauty all around you. Takachiho is also home to some of the Japan’s oldest shrines and is considered the origin of Shintoism.

These times are all assuming you go by car, bus, or train. Fukuoka airport is about 30 minutes from the city and can easily be reached by train. A quick flight can take you Tokyo, Okinawa, Taiwan, or Korea…

Fukuoka is one of our favorite cities in Japan but rarely visited by Western tourists, which is a shame. You can eat well, soak in natural hot springs and see some of the most beautiful temples in Japan. If you’re looking for a less touristy place in Japan, check out Fukuoka.