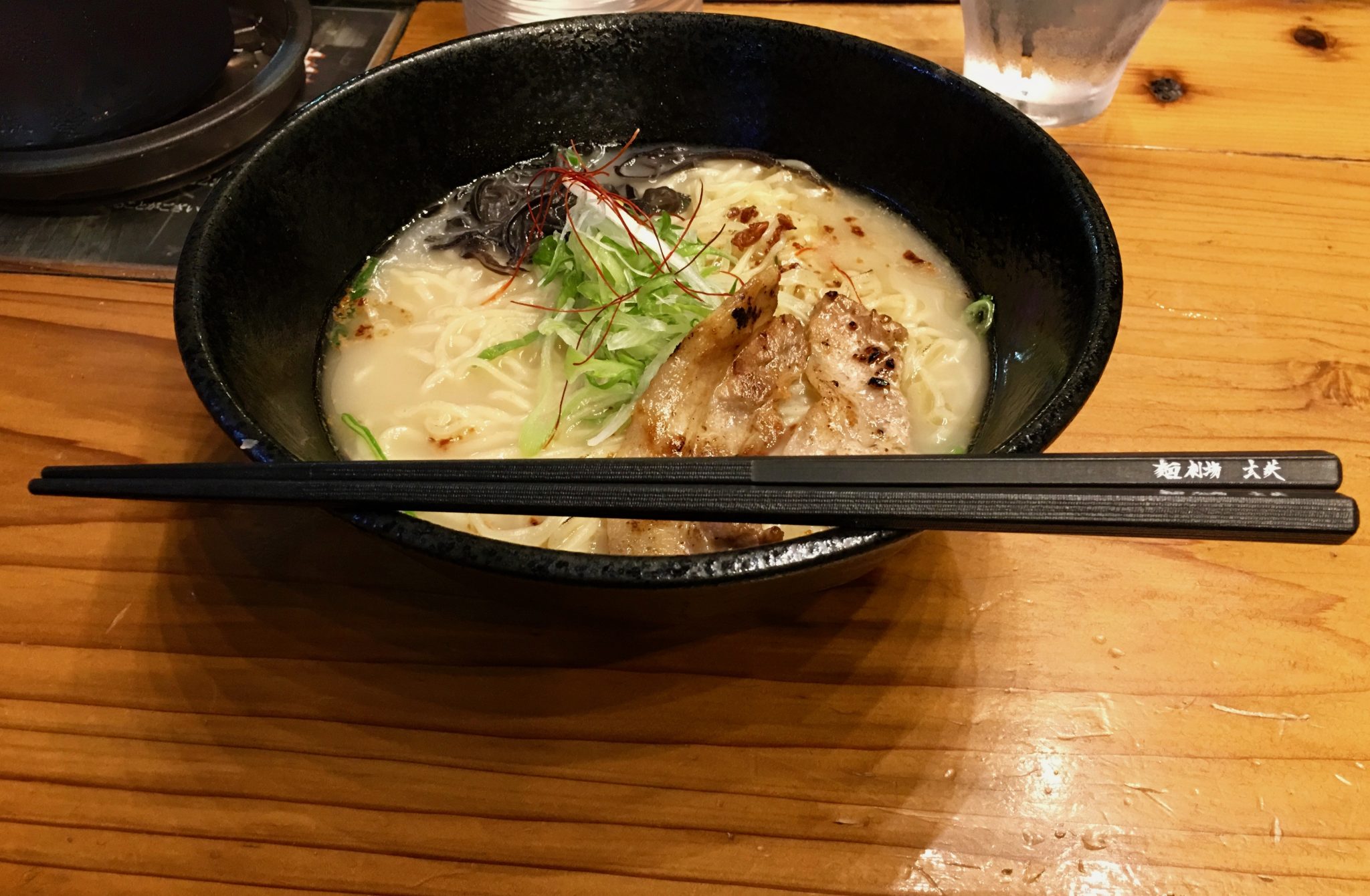 Ramen is like an art form in Japan, with a nearly endless supply of shops competing to stand out from the rest. Each region has its own special way of preparing the broth and the noodles, but Fukuoka is unique both for the popularity of the local style ramen, as well as the sheer volume of options within this compact city.

The best place is going to depend on you, of course, but you’re likely to find the best ramen of your life somewhere in this city. We will help you find that by pointing you toward a diverse mixture of ramen shops.

Fukuoka and the pig

Tonkotsu ramen is Fukuoka’s specialty and ramen lovers come from all over the world just to try it here.

Tonkotsu is a pork based broth that’s slowly simmered until it develops a thick, creamy consistency. While some shops make it thicker than others, tonkotsu is one of the thickest ramen bases out there so be prepared for a heavy meal.

Tonkotsu also stands out for the smell. If you ever find yourself walking down the street and an overpowering stench of pig smacks you in the face, you probably just walked by a tonkotsu ramen shop cooking their broth.

This being said, it’s one of the tastiest and most filling broths out there and when done right it’s spectacular. The consistency is so creamy you won’t believe it’s made with pork. With quality sliced pork on top, along with leek and other veggies, you get a near perfect flavor combination.

Many big names in ramen got their start here. Ichiran has spread all over Japan with their unique setup of each diner getting a private booth to eat in. Ippudo has also spread to places as far NYC, where it’s one of top ramen shops in town. Yet, both started in Fukuoka and still have a strong presence here.

This is a big part of why the city has become so famous for their ramen. These classics showed the world how good ramen can be and draw people. Newer options pop up trying to outdo the others. So, while you can visit the long time classics, one of the best things to do is try some of the more unique newer options that keep improving the process and trying new things.

We’ve put together a unique mix of ramen shops to try that range from traditional to modern. Rather than do some kind of ranking, we have divided the different options into categories based on type.

As we mentioned earlier, a couple of these are now large restaurant chains, but since they started here and have unique locations here, we think they are still worth trying. However, you probably don’t want to start there.

This classic tonkotsu is well-loved by both locals and visitors. The broth is thick but not-too-thick, and the sliced pork is notably good. Try it out for an introduction to Fukuoka’s tonkotsu ramen.

While Shin Shin is more of a classic, this will show you a modern interpretation of tonkotsu ramen. The broth is msg free and everything is made by hand in the shop with an emphasis on top-notch ingredients. We also tried the ebika oru, which is soy sauce based and infused with prawn. Both were fantastic. Portions are smaller than usual, but it’s because the quality is high.

They’re also known for their egg and rice side dish, which is a Japanese classic. They bring a raw egg and a bowl of rice. Add the egg to the rice, mix it up, and eat.

The small block surrounding this ramen joint has a few shops that are said to be the oldest, but many consider this to be the real one. It’s one of the cheaper options and the broth is lighter and saltier than other places. It’s common to order extra noodles and meat. It’s not amazing, but it’s good and reasonably priced. Some disagree, though and consider it the best example of traditional Hakata ramen.

This shockingly cheap option is actually pretty good. They feature a basic ramen dish for 280 yen and more loaded one for 480. It’s not on the same level as the others here, but considering it’s less than half the price it’s pretty impressive.

Go here to try something a bit more unique. They have a genoa style ramen that adds a pesto flavor to the typical tonkotsu broth. It’s a beautiful combination and will offer a contrast to everything else you try.

The heavy one: Hakata Issou

Fair warning, you can smell this place a block away. But, just look at that broth. It’s creamy like a cappuccino with the just the right intensity of flavor. A simple tonkotsu ramen joint with only a few options to choose from, but it definitely stands out in this city full of ramen options.

With locations in places as far off as NYC, Ippudo isn’t quite as unique to Fukuoka, but this is where it all started. Their tonkotsu base is on the stronger side and Josh loves the intensity of it. They opened a two-story location that serves the classics upstairs and has a standing sake bar downstairs that features small appetizers. They also have a smaller sized traditional ramen bowl, so you can try both without stuffing yourself.

This is another place that’s spread all over, so you can find it elsewhere if you don’t get a chance to try it here. That said, they offer one of the most unique ramen experiences around. First, they allow you a lot of customization. When you order you get a form to specify the strength of the broth, noodle hardness, and many other specific preferences. Additionally, you eat in a separated booth with your own seasonings and water spout. The idea is that you can intently focus on the ramen eating experience. It’s fairly touristy and a bit overpriced, but worth trying at least once.