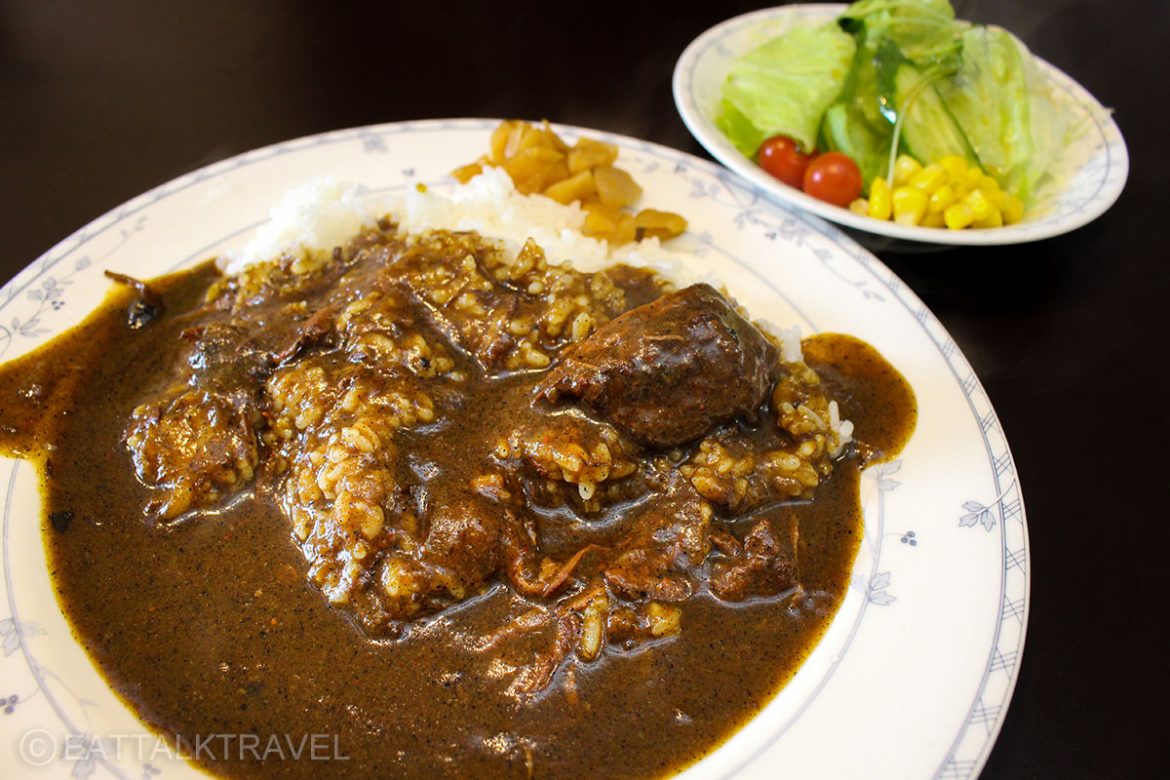 Last Updated on October 18, 2020 by eattalktraveljapan

Comparing Japanese curry vs Indian curry isn’t as straightforward as it seems. At first glance, they’re two variations of the same thing, but the history of Indian curry and how it got to Japan is complicated.

To clear things up, we’ll explain the complicated history of curry and how it made its way to Japan. By the end of this article you’ll know a lot more about curry, how it made it’s way to Japan, and there’s a good chance you’ll be drooling to try some in Japan.

What is Indian curry?

At the most basic level, curry just means a sauce used to cook meat or vegetables. It’s usually water-based or coconut-based, but the liquid vary throughout the country. Different regions have their own way of preparing curry and would disagree about what’s in it and how to make it.

The closest thing to what most people outside of India think of as Indian curry is a variation of a specific dish in Southern India (not a spice mix). It’s usually made with fresh ingredients and isn’t related to curry powder. In fact, curry powder doesn’t exist in India.

How the British transformed curry

Curry powder is actually a British invention. Blends of dried spices were imported from India to the UK and have evolved into what is now considered curry powder.

What is Japanese curry?

When Japan first made contact with the British in the 1800’s curry was an exotic luxury. As it grew in popularity, it became a regular dish served to the Japanese military. This made curry even more popular with the general population and throughout the 1900’s it evolved into one of the most common dishes in the country.

Just like the British transformed spices into a mix that suits local tastes, the Japanese transformed curry powder into a Japanese dish. It’s still based around curry powder, but it has a thicker consistency that resembles a gravy or a stew. You can find spicy versions, but the most common style is milder and sweeter than British curry.

Japanese curry vs Indian curry: it’s about more than the sauce

Indian curries are usually served with rice or some kind of flat bread—or both. But beyond that, most of the variation is in the ingredients that are in the sauce.

Japanese curry also comes with different ingredients and side dishes, but the most common type is called curry rice. It’s just like it sounds—curry sauce and rice. There’s usually a serving of pickles on the plate, too.

However, there are also some other uniquely Japanese types of curry. Katsu curry is curry rice topped with a breaded pork cutlet—it’s heavy, but delicious. Then, there’s curry udon, which is curry with udon noodles. There’s even a curry ramen.

One of our favorite Japanese curry creations is curry pan, which means curry bread. It’s a fried, savory pastry filled with curry sauce in the middle. Just like rice balls, curry pan is the perfect meal on the go.

Japanese curry across the country

You can find different meat in curry all over Japan, but the meat of choice varies by location. Pork is the go-to meat in Tokyo and the surrounding region, while Osaka prefers beef. Okinawa prefers to make chicken curry.

Different regions also have different side dishes that go along with the curry plate. Pickles are pretty standard no matter where you go, but another popular option is egg. Usually, an egg means a soft boiled egg, but Osaka does it a little differently. They offer a raw egg on the side, which you’ll never see in Tokyo. This sounds strange, but just like with TKG, raw egg and rice make a beautiful combination.

Which curry should you try in Japan?

Japanese curry has spread all over the world just like Indian curry but not nearly to the same extent. So, when in Japan you should definitely prioritize eating Japanese curry.

We also recommend that you avoid chain restaurants like Coco Ichibanya. It’s not that they’re bad, it’s just that every Japanese city will have a better option that’s unique to the area.

Oh, and as we’ve mentioned before, you should seek out the lunch sets—a set menu available at lunch time. This general rule is even more useful with curry because some restaurants will offer a special lunch curry or only serve curry at lunch. When in doubt, see if locals workers go there. That’s always a good sign!