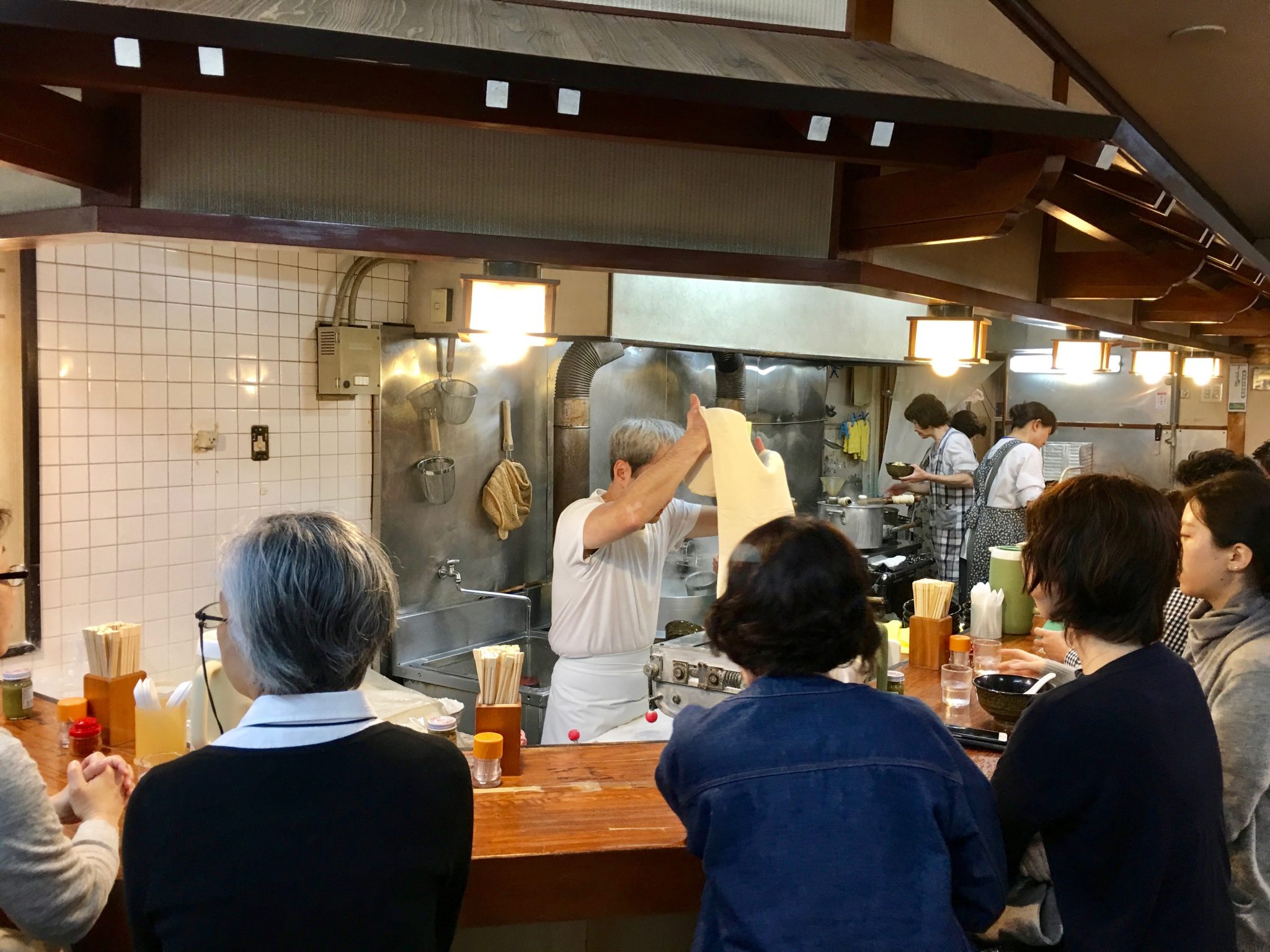 Last Updated on October 14, 2020 by eattalktraveljapan

We already told you about Ramen in Fukuoka. It’s become the go-to dish for most every visitor who sets foot here.

It’s no exaggeration that Fukuoka’s Tonkotsu Ramen is the best you’ll ever try. But, we were surprised to learn about how good the Udon noodles are. In fact, many locals are even more enthralled with udon than ramen.

Kagawa is considered the capital of Udon, so even many Japanese people don’t know about Fukuoka’s Udon skills.

What are Udon noodles?

Udon noodles are made primarily of wheat and water. The most distinctive feature about them is their thickness. When compared to Ramen, for example, they’re probably 3-4 times thicker.

The history of this noodle is debated, but Fukuoka considers itself the birthplace of udon in Japan. It was brought over by a traveling Chinese monk and became a part of the local cuisine before spreading throughout Japan. Today, it’s one of the country’s most famous noodles.

Hakata Udon (Hakata is a district of Fukuoka) doesn’t just stand out for being the birthplace of Udon, but it’s also prepared differently.

Most of Japan cooks Udon until it reaches a firm texture. Kind of like the way Italians like pasta to be firm to the bite. Well, Fukuoka is different. They are known for their soft noodles. Many Japanese are surprised when they try it here because the texture is so different.

While not everyone loves this soft style, we were just as dazzled by Fukuoka’s Udon as we were by their Ramen.

Udon is served either hot or cold. It’s worth it to try both styles because they’re kind of different.

Hot Udon is served in a soy sauce based broth with a little chopped leek added. It’s like a basic noodle soup that’s relatively light.

Cold Udon is served on a plate with a sweeter soy-based dipping sauce. You lift the noodles with chopsticks and dip the noodles into the sauce before taking a bite. It’s very refreshing during warmer months.

Just like Ramen, there are many possibilities about what to add to this simple base. Tempura is one of the most common things to add, and it’s what Fukuoka does best.

Tempura comes in many varieties. It’s usually seafood or vegetables dipped in flour and then deep fried. As a port city located in a region that grows lots of vegetables, Fukuoka has plenty of both ingredients.

But, burdock root is a unique option to try. You can get small slices mixed with other vegetables or go all out and try the full burdock experience, which is deep fried burdock that’s as big as your face.

Since burdock is a hard root vegetable, it seems to work especially well for deep frying. It softens up the texture without eliminating the crunch.

Like we said, this is a city known for great noodles, so there are many restaurants with Udon on their menus. Just try any of them, and you probably won’t be disappointed. Keep this in mind as you traverse the city because our primary recommendations can have long lines that you may not want to deal with.

There’s also a local chain called West with a few locations around Fukuoka. Megumi’s local friends told us that even though it’s a chain restaurant the noodles are good and it’s popular with people from Fukuoka. We found it to be surprisingly good.

Now, we get to the best. These two Udon shops are fantastic, and you should go out of your way to try at least one if possible.

This is a tiny shop that many locals consider the best Udon noodles in Fukuoka and they make them fresh inside the restaurant (pictured at the top of this article). In fact, you’ll probably see them doing it right in front of you. There’s someone rolling dough and shaping it into noodles, someone preparing the soup, and two people taking orders. So, it’s a fantastic place for Udon but crowded pretty much all the time. Lines form before they even open. Try Niku Gobo, which is their specialty. It’s meat and burdock root.

This the first place we tried, and we had to return because it’s so good. Their noodles are also fantastic, and they’re known for their burdock root tempura. Remember the face sized fried burdock we mentioned above? We tried it here and you should too. It’s easier to get a table here than Taira, but lines can still get long at peak times.

Seriously, go out of your way for Udon

If you’re a noodle lover, you should go out of your way to try one of these two places. Totally worth the wait. But, if you don’t have time, just go for a local restaurant serving Udon that looks good and try it for yourself.

Odds are you won’t be disappointed.