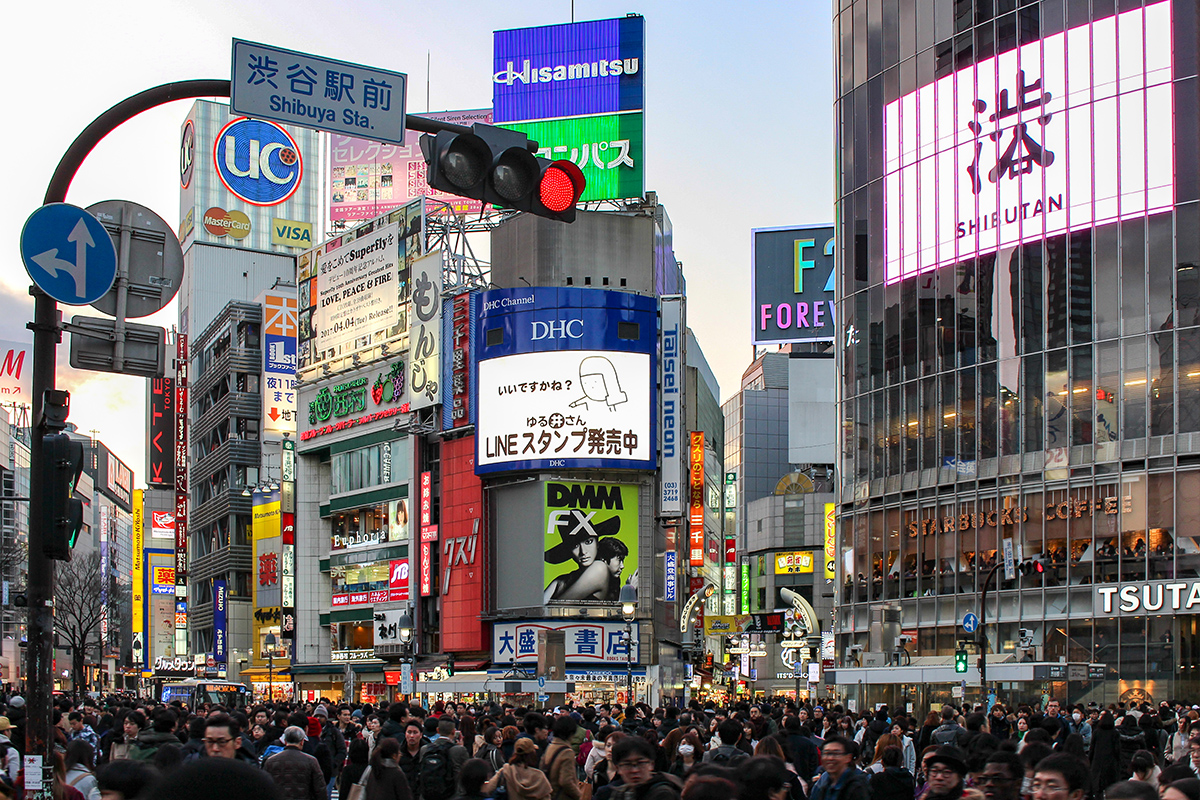 Last Updated on July 25, 2018 by eattalktraveljapan

Note: Hi.Josh here. I want to offer some perspective from my first time in Tokyo. At the time, I was a solo traveler setting foot in Asia for the first time. Tokyo was a great place to start…

My first time in Tokyo it felt like I entered the future.

The buildings were new and futuristic. The metro system was shockingly clean and punctual.

People moved around the city in an orderly fashion and most went out of their way to follow the rules, blend in and be good citizens.

Except for the minority that goes in the opposite direction.

What About The Rules?

Before arriving, I worried about following the rules. I had read about all the specific ways to do things and how often foreigners make mistakes.

For example, I heard a lot about bathroom slippers.

Japanese people use separate slippers when going to the toilet. When you visit someone’s home or a traditional restaurant you might see special slippers near the bathroom. You put them on, do your thing, then leave them where you found them.

A lot of foreigners put them on and then forget to take them off.

Then there’s the bowing.

I learned about all the proper ways to bow in different situations. You need to adjust your angle and timing depending on the age and status of the other person. Since many tourist guides emphasize bowing the right way I expected it to be important for daily life.

Here’s what I learned about Japanese etiquette once I arrived:

If you are foreign, many people assume you know nothing about the culture. You will make mistakes, but people won’t care as much as you expect them to.

In Tokyo, while things like bowing and bathroom slippers are still a part of the culture, it’s more casual than I expected. People rarely expect you to do a specific bow unless you are in a formal situation or ceremony. Even then, getting it wrong probably won’t be offensive.

Rather than making mistakes and offending people, you’re more likely to get compliments for little things:

“Wow, you can use chopsticks!” 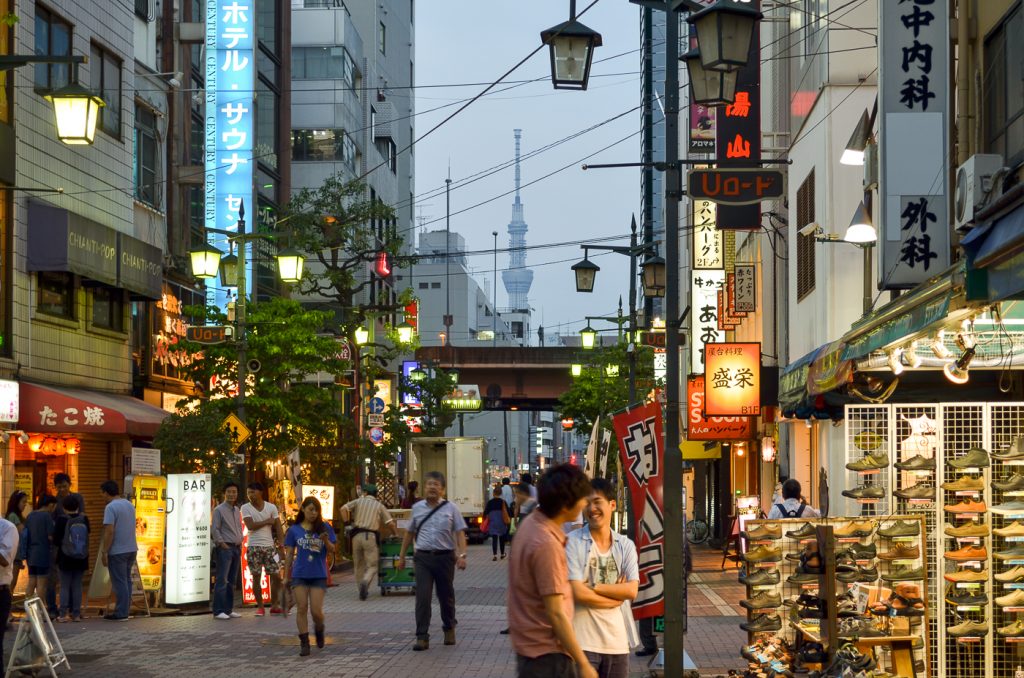 You don’t feel normal your first time in Tokyo

While the rules aren’t as strict for foreigners as they are for locals, you’re still not going to blend in. I don’t mean because of how you look, but because of what you think is normal.

You probably assume that how people do things where you live is “normal.” You have your own quirks, but there are many things you do that seem normal because of your culture.

Tokyo will challenge you on this, especially if you’re from the U.S. because so many aspects of our cultures are different.

Here, what you think is normal is weird.

Do you ALWAYS take off your shoes before entering the house? Do you separate your garbage into burnable and non-burnable? Do you eat with chopsticks? Does your toilet seat heat up and wash you afterward?

If you take your dog for a walk, do you clean up after him or her? Then what? Do you neatly pack it up, take it home, and dispose of it in the toilet?

If you answered, “no” to any of these questions, I have some news for you:

You are weird. At least, while in Japan.

What About The Harajuku Girls?

Most Japanese people blend in and follow the rules, but Tokyo’s Harajuku neighborhood is the hangout of those who don’t.

It is the center of one of Japan’s most interesting obsessions:

Harajuku is a trendy district filled with shops that cater to girls obsessed with cuteness… And tourists.

Pink frilly dresses, stuffed animals, and various heart-shaped things surround you. There is an obsession with crepes, cakes and every other sweet indulgence imaginable.

Then there are the make-up shops that go way beyond the usual cosmetics. First, there’s the skin whitening cream. While Americans and Europeans want to be tan, many Japanese women want to be as light skinned as possible.

Then we have the eye accessories. There are the usuals, like mascara and eyelash extensions, but there’s also an obsession with big eyes. Megumi translates it as “puppy eyes.” Small, cute and innocent are how many girls want to look, and they go to extreme measures to get it.

While not many women go as far as eyelid surgery, there are many other ways to get this appearance. Besides eyelash extensions, the most popular is glue.

A light layer of glue on top of your eyelid makes your eyes appear bigger and adding contacts to the equation creates big eyes that look like a doll.

While Harajuku is about cuteness, Akihabara is the Japanese version of geek culture.

There are maid cafes, where women dressed as maids cater to men and curious tourists. At first, this sounds like some variation of a strip club, but it’s nothing like that. It’s not sexual at all.

It’s about feeling like a boss or authority figure. The women dress up as maids and play a role. Basically, they’re an actress, here to serve and entertain you with coffee, conversation and board games.

The “maids” tell you elaborate backstories about who they are and where they come from that resemble a science fiction novel… They come from a magical place in another galaxy. In fact, it’s against the rules to ask for details of their personal lives.

Akihabara is also the center of manga and collectibles. There are multi-story malls devoted to various types of collectibles and comic books.

While there is a mixture of manga for men and women with a variety of interests, it can also get a little disturbing. There are large sections of adult manga featuring graphic sex and violence. Collections of men spend hours browsing what you’d find shocking.

Putting Together The Contradictions

These contradictions make Tokyo a fascinating city just to roam around.

Many large cities offer a kind of sensory overload. You move through crowds of people, surrounded by flashing lights and billboards.

Tokyo offers something different. There are flashing lights, but also a broad culture that often seems contradictory.

Your first time here will disorient you as you try to make sense of it all. One minute, everyone moves the same, looks the same and lives their lives in an orderly way.

Then, you turn down a side street and it all changes. Girls in bright, colorful outfits surround you. Some of them hold signs and scream in high-pitched voices to get you to go to a shop of some kind.

Then, you step back in time. Other parts of Tokyo remind you that the massive city is hundreds of years old. Or thousands, depending on how you define it’s beginning.

No matter what you do, Tokyo is a whirlwind of fascinating contradictions. You may not understand much of it, but you’ll leave fascinated and wanting more.