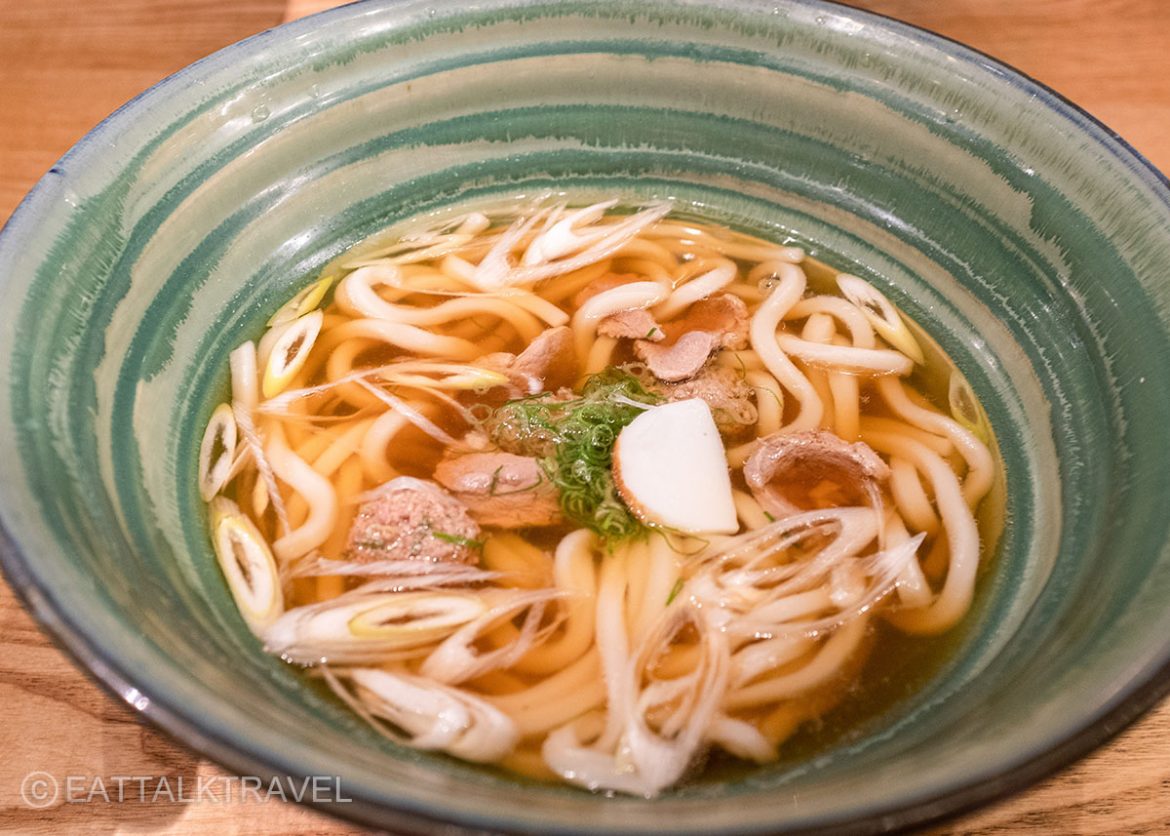 Last Updated on October 18, 2020 by eattalktraveljapan

While udon noodles are one the most popular foods in Japan, you may not know much about them (or even be aware of them). Japanese ramen seems to get all the attention. And while ramen is awesome, udon noodles will amaze you, too.

What are udon noodles? How are they made? Why are they special? We’ll answer these questions and more. By the end of this article you’ll be drooling for a bowl of noodles.

What flour are udon noodles made from?

Udon noodles are thick, flat noodles made with wheat flour.

Great udon is made from high quality ingredients and the best ones are made by hand. They are an incredibly simple food with only three ingredients: wheat flour, water, and salt.

At first glance, they are similar to a thick Italian pasta. While there are similarities, the most common preparation, called Sanuki udon, is prepared differently. It’s boiled and then cooled in water, rather than served immediately. This process creates a distinct texture and is why udon stands out from other noodles.

What is the difference between soba and udon noodles?

While we’re on the subject of spectacular Japanese noodles, we need to have a brief chat about soba. Soba and udon are noticeably different. Frankly, soba deserves an article of its own, which we’ll make soon…

But, at a basic level, the main difference is buckwheat.

Soba noodles are buckwheat noodles. They are often blended with wheat flour for a milder consistency, but you can also get 100% buckwheat soba. While the proportions vary, buckwheat plays a central role in soba noodles and give them a thicker texture and a heartier taste.

There are many different styles of udon noodles in different parts of Japan. There is Mizusawa Udon from Gunma, Himi Udon from Toyama, Goto Udon from Nagasaki, and Kishimen from Nagoya. Just to name a few.

However, the most popular are Sanuki Udon (which we introduced already) and Inaniwa Udon, which is also common. You are most likely to come across these two no matter where you go in Japan.

Beyond the noodles, different regions have different types of broth and styles of eating it.

What is Sanuki Udon?

Sanuki udon is by far the most popular all over Japan. It’s made in Kagawa prefecture, which is known as the udon prefecture. Sanuki is the old name of Kagawa, which is where the name comes from.

Kagawa is perfectly suited to growing wheat, which is why they specialize in wheat-based noodles. If you ever get a chance to visit, this is the perfect place to eat udon noodles. There are hundreds of noodle shops throughout the region.

Sanuki udon is made by combining wheat flour, water, and salt into a ball of dough. Traditionally, it’s kneaded by hand, flattened, rolled, and cut. The cut noodles are boiled in hot water and then immediately cooled with cold water.

The boiled and cooled method is the most common method of preparing Sanuki Udon and you’ll find in most parts of Japan. But, not in Kyushu…

Like we mentioned in our article about Fukuoka udon, in Kyushu they serve their noodles soft.

Japanese people from other parts of the country find this strange, but you’ll probably find it more familiar. The reason that the noodles are soft is that they skip the cooling phase. They boil noodles fresh and serve them right away which makes them softer.

How is Inaniwa udon different than Sanuki udon?

Inaniwa udon is completely different from all styles of Sanuki udon. The ingredients are the same, but the process of turning them into noodles is different.

The dough is covered in flour and kneaded over and over again. It’s then rested, kneaded again, and flattened. This process of slowly kneading the dough over and over again lets in more air bubbles which create a much chewier texture when they’re finished.

After repeatedly kneading the dough, they are flattened, and cut thinner than Sanuki udon. Finally, the noodles are dried. This complex process leads to a chewy noodle that you’ll never forget.

How do you eat udon noodles?

So far, we’ve focused on the noodles, but what you eat them with makes a huge difference. Just like the noodles, there are too many regional varieties to cover them all, but the basic dish is udon noodles served in a soup.

The soup varies but it’s quite different depending on the region.

Kagawa, the land of udon, is known for more than their udon and their soup. They have a distinct way of eating it. People eat their udon in self-service restaurants where you adjust the taste for yourself.

Kansai, home of Kyoto and Osaka, has a clear and mild soup that’s made with kombu (seaweed). People drink the soup when they’re finished with their noodles, unlike some other regions.

Kanto, home of Tokyo, has a much more intense soup for their udon. It’s dark, salty, and made with bonito flakes (fish). Since the soup is so intense, most people don’t drink it after they eat the noodles.

Just like Japanese curry, udon noodles don’t get as much recognition as they deserve. Most people are obsessed with ramen and eat lots of it, yet they ignore udon. But, udon is just as good—often better.

So, if you plan to visit Japan, udon noodles should be one of the top foods on your list. Even if you don’t get a chance to visit, there’s a good chance you can find a local Japanese restaurant that serves them or even try preparing your own.

By the way, if you’re obsessed with Japanese noodles, here are a few other articles we think you’ll like: