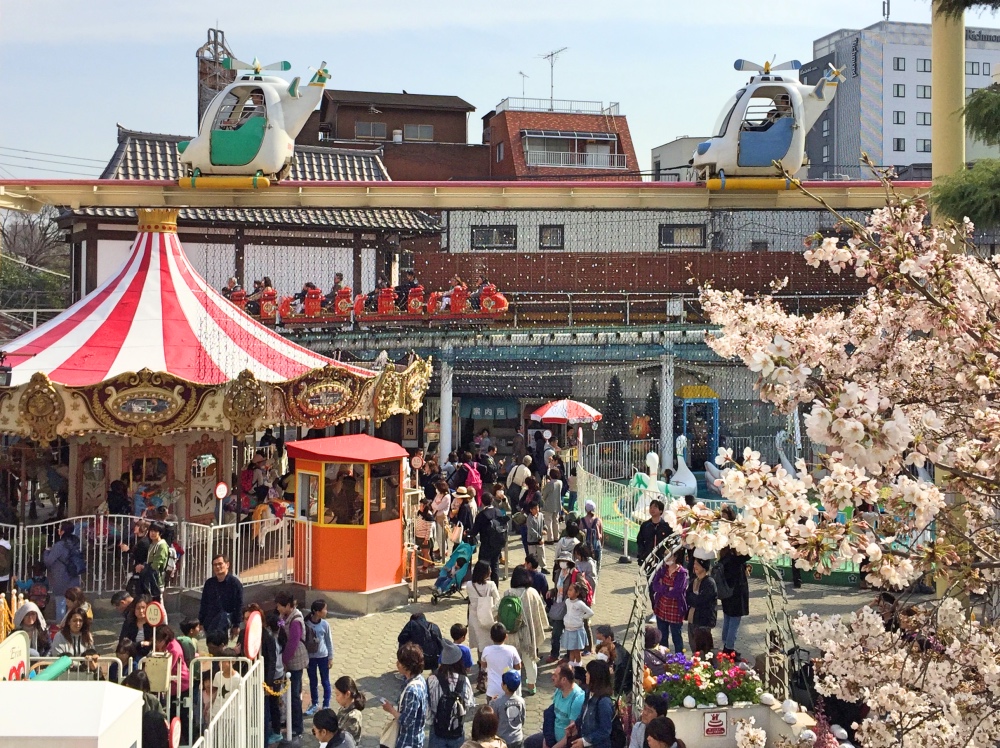 Last Updated on May 8, 2018 by eattalktraveljapan

Asakusa is one of the most popular tourist spots in Tokyo, especially for foreigners.

If you have been to Japan, you probably visited Asakusa, right?

The typical visit to Asakusa focuses on a very small area: Sensoji Temple, from Kaminarimon gate through Nakamise Street. This is the golden course for tourists. However, this area is really just a small part of this historical neighborhood.

Did you know that the oldest amusement park in Japan is only one block from Sensoji Temple?

Probably not since no one mentions it to visitors.

I went to Asakusa yesterday and saw tons of tourists there along the golden tourist course. My guess is that 80% of the people there were from different countries since it’s now the middle of cherry blossom season. This is the best time to come to Japan.

However, about 100m away from Sensoji Temple it was the total opposite. Around 95% of the people I saw were Japanese. I only saw two groups of foreigners in the amusement park, Hanayashiki.

Hanayashiki opened in 1853 as a social botanical garden for the upper class. Later, it changed to a zoo for common people. Although it was closed during World War II, after the war it reopened as an amusement park with some common attractions, such as roller coasters. Today, it remains and is the oldest amusement park in Japan and is still in Asakusa near the Sensoji Temple.

But, just to be clear, this is not an amusement park like Six Flags, where people enjoy fast, wild and crazy coasters. Hanayashiki is a place to enjoy the atmosphere of traditional, nostalgic and a kind of weird stuff.

For example, the fastest roller coaster is not fast compared to Six Flags, but is thrilling because it’s small, old roller coaster that’s nestled between the buildings and houses of Tokyo…

Why go to an old amusement park?
I’ll admit, this probably isn’t for everyone. If you’re on a tight schedule you may want to do the usual tourist route. Sensoji Temple is a really beautiful place…

But, if you are looking for something non-touristy to do, be sure to hop into this nostalgic amusement park. It’s a great place to experience old Tokyo and afterward you can say you rode an old roller coaster in one of the biggest cities on earth.

Tip: If you have a Tokyo Sky Tree ticket or a Tokyo Cruise ticket, entrance fee will be FREE.

So, if you plan to go Tokyo Sky Tree and Asakusa on the same day, you should go to Tokyo Sky Tree first and save your ticket. After you visit Sensoji Temple, you can enter Hanayashiki for FREE. *Until May 21st, 2017

Or, if you come to Asakusa by water bus, Tokyo Cruise HIMIKO, or HOTALUNA, you can enter for FREE too. *Until March 31, 2018

Besides Hanayashiki, there are many hidden restaurants and small shops in Asakusa. Get out of the tourist crowd and stroll Asakusa to find unique things!