Last Updated on February 10, 2019 by eattalktraveljapan

Tokyo is a sprawling metropolis that will overwhelm your senses and redefine what you think about cities. That said, you’re probably going to want to get away for a little while and Kamakura may be the ideal choice.

The typical thing to do is get a rail pass and take the “golden route” through Kyoto and Hiroshima. This is a great trip, but if you do it you don’t want to rush the process.

So, if you don’t have time to give the “golden route” the time it deserves (or you have a lot of time and want to see even more) than we’ve got a great option for you…

Kamakura is a small city with a big history. This was once the political center of Japan and it is where the Samurai culture developed. The geography was great for defense, due to the mountains surrounding the city and the ocean in front of it.

It’s also very beautiful, with a historical vibe that’s like a smaller version of Kyoto. You’re surrounded by both beach and mountains with ancient temples scattered all around the region. It’s probably best known for the giant Buddha statue, but there’s also great food and a lot of natural beauty. 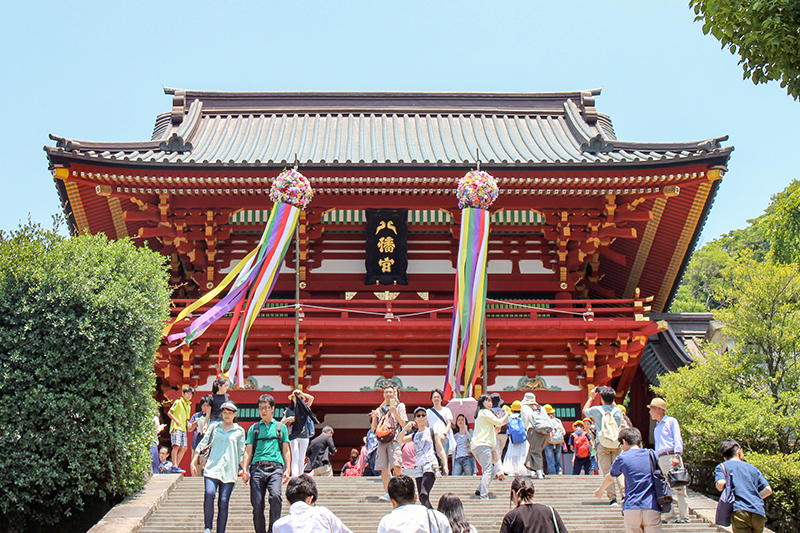 Although Kamakura is a fairly small city there’s still a lot to see. While we’re writing this assuming that you’re looking for a day trip, there’s plenty more to see if you want to stay longer.

If you get a chance, the city offers free walking tours periodically. This is a great way to see the basics of the city and the main shrine, Tsurugaoka Hachimangū. They will introduce you to a few local specialty shops and talk about the history of the city. At the end, you will see the shrine and learn how to bow and make an offering.

If there’s no tour available, no problem. You can still stroll through the city and visit the shrine on your own or go for the paid tour of your choice.

Kamakura has plenty to eat. You can get most of the classic Japanese dishes, but here are a few unique things that you should try.

These tiny little fish can be found throughout Japan, but Kamakura is known for them. They might look a little strange, but if you’re a fish lover you should definitely give them a try.

These little octopus crackers have become a popular snack in the area. It might also sound strange, but they’re not. Octopus is popular in Japan and this is a really unique way to try it. They are flattened into the shape of a cracker and have a mild octopus taste with a nice crunch. 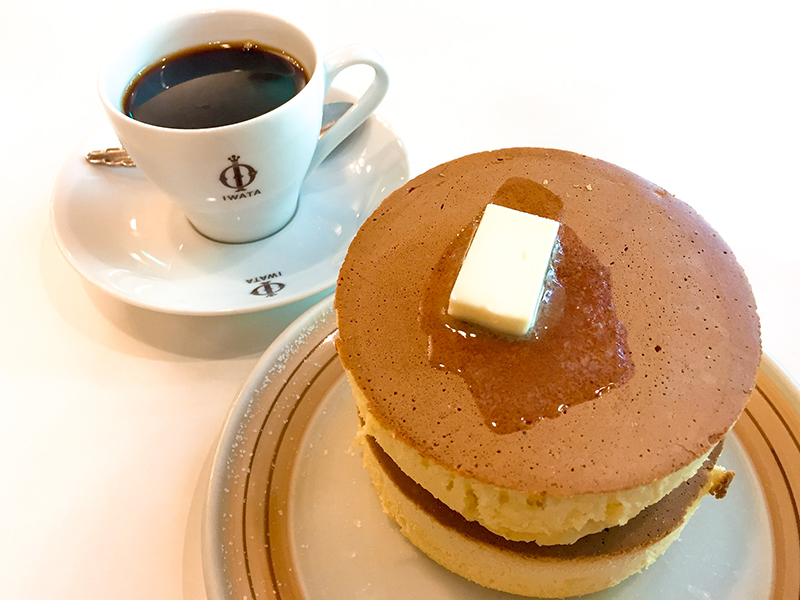 You’ve never tried a pancake like this before… Iwata Cofee is a local coffee shop that has become famous for their thick, made-to-order pancakes. They’re not mind blowing or anything, but they’re really good pancakes and the shape makes them look cool. Be warned, you may have to wait about half an hour for them to make it. While you’re here, try the coffee, too. Iwata is a specialty coffee shop that roasts their own beans. They freshly brew and grind each cup of coffee. 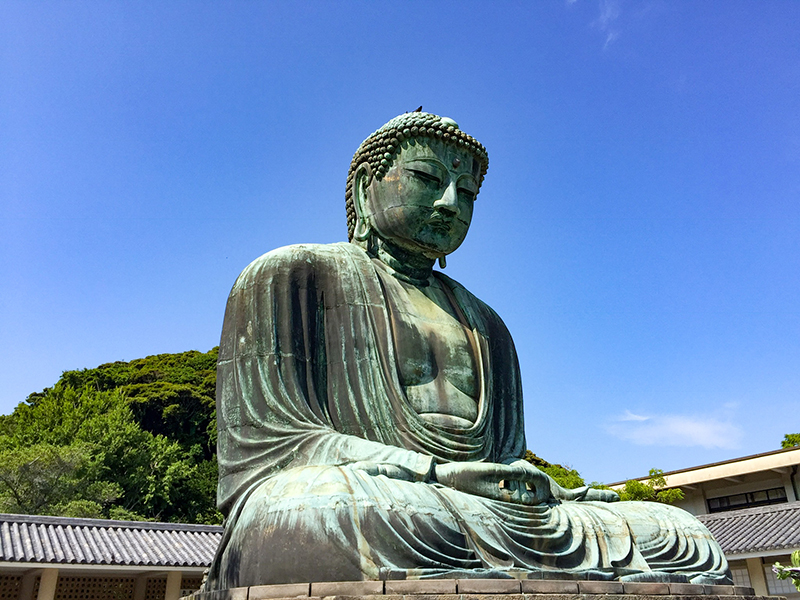 While it’s possible to walk to the big Buddha, you may want to take the train if it’s really hot out—like it was for us. We’ll get into the train itself momentarily, but to start let’s talk about the Buddha.

This giant statue has become one of the main symbols of Kamakura—and of Japan. Granted, it’s not the only big Buddha in the world but this statue has some distinguishing features.

First off, it’s out in the open air, rather than being covered. The original statue was made of wood, but after being destroyed by a storm, it was rebuilt using bronze. This was a huge and expensive project but has been great for preserving the statue.

It was originally housed in a building, but the building was also destroyed… twice. The last time this happened was 1498 and it’s been out in the open ever since. Incredibly, the statue has survived over all the centuries since.

While you’re there, we recommend going inside the statue. You take a tiny, circular staircase and head up to the top. The inside isn’t particularly large, but you can see all the welding that was necessary to put the bronze statue together. It’s incredible to imagine that this happened so long ago… 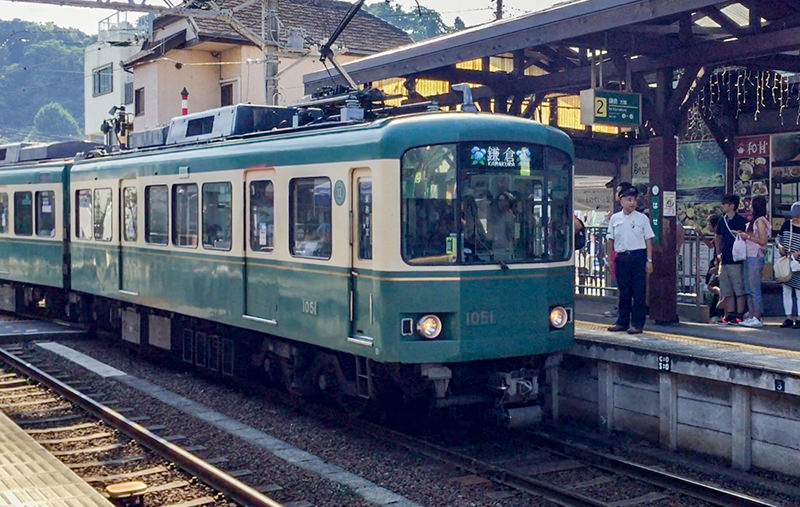 We briefly mentioned taking the train to the giant Buddha. The reason why is that there’s a special electric railway that takes you from Kamakura to Enoshima. This historical train is an experience in and of itself.

The train is above ground and you get a great sea view along the way. It will take you near the statue and then continue along to Enoshima, which we’ll mention next.

There’s a day pass for this special train and it’s totally worth it. It will get you around town during the day and you can enjoy the view from inside. Fair warning, though, it does get crowded during peak times.

Here’s more info about the train. 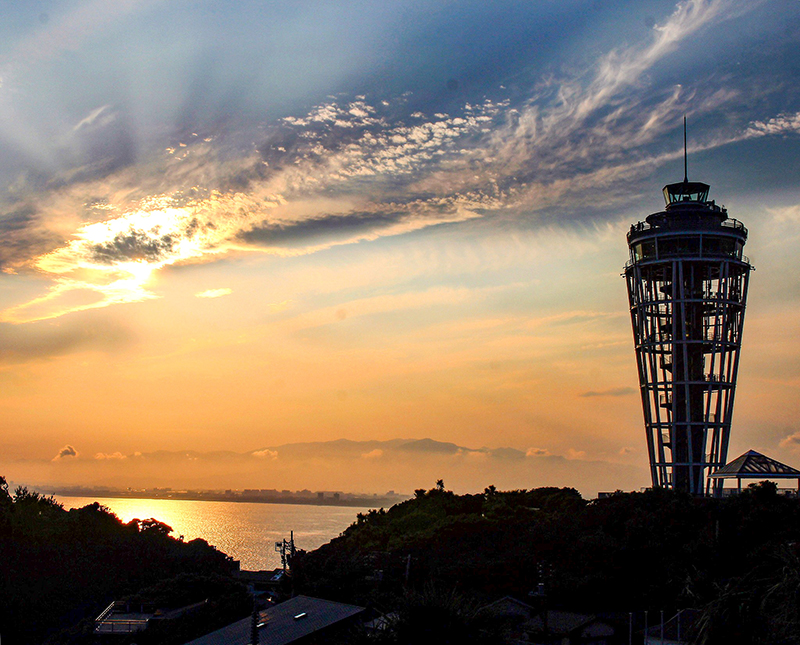 The electric train takes you all the way to Enoshima, a small island just off the mainland, connected by a long bridge.

We told you about the beautiful view from the train, but Enoshima is even better.

From the shore area, take a walk along the main street toward the shrine. Slowly make your way up the hill until you get to a long set of stairs that take you up toward the sea candle—a lighthouse with a spectacular view.

You have two options here. You can just go for the long walk up to the top, which involves many different sets of stairs, or you can just take the escalator. Actually, it’s a series of escalators with little walks between them.

From the top, you take a walk to the candle. Along the way are beautiful flowers, a small cafe and plenty of great views. If you make it this far, you should definitely go to the top of the sea candle. From the top, the views are totally worth the effort. If it’s not too windy you can even go outside into the open air, rather than just looking through windows.

You should spend at least a day in Kamakura

If you’re going to Tokyo, you should really go out of your way to visit Kamakura at least once. The historical atmosphere and the calmer vibes are a nice contrast to the craziness of Tokyo (if you avoid peak times). You can eat well, explore Japanese history, and see some fantastic landscapes.

It really is the perfect day trip.