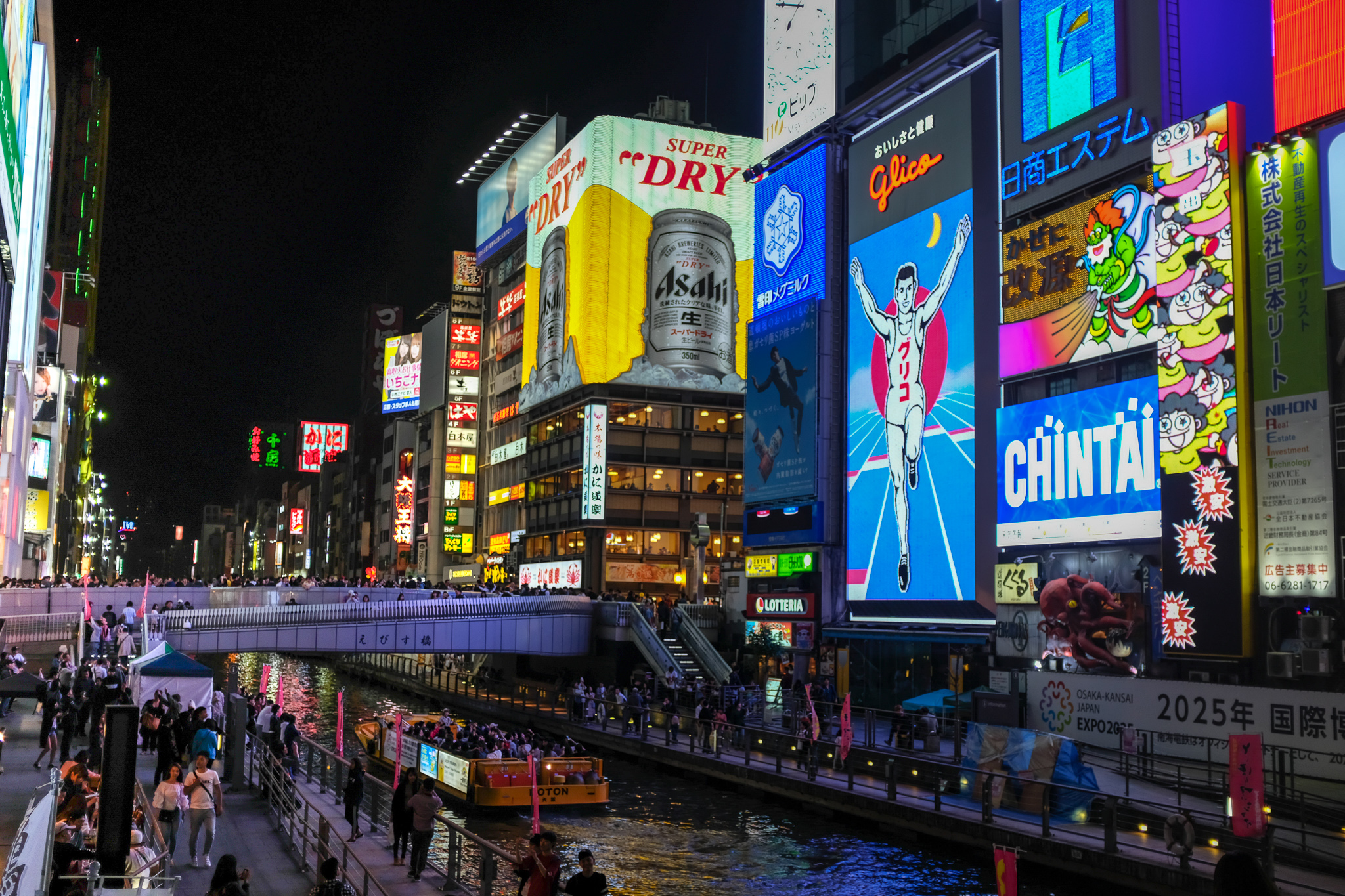 It’s usually described as a nightlife city with little else to see and do. As a result of this perception, most people just pass through on their way to Kyoto or skip it all together.

This is a mistake—especially for foodies.

Street food, markets, and even Michelin starred restaurants are everywhere. They are usually cheaper than the ones in other parts of Japan, too.

Beyond the food culture, Osaka has a very casual vibe compared to Tokyo and other large Japanese cities. Most people are open, friendly, and talkative. Even if you can’t communicate in Japanese, this creates a unique vibe that you’ll feel when exploring Osaka.

But, how long should you spend there?

There’s no one perfect answer, but if you made it past the first paragraph, you’re probably curious about the food culture and the vibe. We’ll break down what stands out about Osaka so you can decide the ideal amount of time to stay.

You should consider these three things:

For short trips, stay in Osaka or Tokyo

Japan isn’t a large country, but there’s a lot to see and do. Each region has its own culture and traditions, plus the climate varies a lot from the extremes of chilly Hokkaido in the north and tropical Okinawa in the south.

Since there is so much see and do, many people try to cram as many different things as possible into their trip. The most common thing is to take the Golden Route, which focuses on Tokyo and Kyoto with short visits to Mt. Fuji and Nara.

While this can be fun, we don’t recommend it unless you have 2-3 weeks. Japanese culture is very different from most other cultures and if you try to do too much you won’t understand anything.

If you have one week or less, we recommend you focus on either the Tokyo or Osaka region. You can divide your time according to what’s most interesting to you and take a day trip to someplace nearby.

For Osaka, food is the highlight, with a handful of other attractions to visit. But, you also have the advantage of being close to both Kyoto and Nara, so if you like it more or less than expected you can easily adjust your time.

For history, stay in Kyoto or Nara

Kyoto and Nara are two of Japan’s most traditional cities and are filled with beautiful and historical attractions. But, they don’t have much nightlife and there are fewer food options.

Osaka is a fantastic food city, but when it comes to historical sites it doesn’t compare to Kyoto or Nara.

So, after figuring out how long you’re going to be in Japan, think about what’s most interesting to you. Do you want to spend most of your time exploring Japan’s history, temples, and artifacts?

Or, are you looking to really to experience modern Japan and try lots of unique foods?

If you want to visit lots of temples and feel like you’re in ancient Japan, then it’s better to stay in Kyoto or Nara. You can spend your time exploring the history of Japan and take a day trip or two to Osaka.

But, if you aren’t that into history, you should stay in Osaka and take day trips to Kyoto and Nara.

Stay in Osaka if you’re all about the food

One of Osaka’s most famous sites is a statue of Kuidaore Taro—a colorfully dressed drummer boy—who represents a very Osakan word: Kuidaore. Kuidaore means to eat yourself into bankruptcy…

Don’t take this too literally, but it should give you an idea of the importance of food in Osaka. People love to eat so there’s a fantastic food culture all throughout the city.

Foods like Takoyaki and Okonomiyaki were born in Osaka and have become popular all over Japan (and many other countries). You can also find other common Japanese foods, like ramen and sushi, in unique local variations. Local people are highly opinionated about food, too, so restaurants with bad food don’t last.

So, if Japanese food is one of your main interests, you’ll love Osaka.

We already mentioned it briefly, but also keep in mind Osaka’s relation to other cities.

It’s the largest city in the Kansai region, which also includes, Kobe, Kyoto, and Nara. Kansai is the second largest region in Japan, after Tokyo.

So, while it’s not Tokyo, it’s still huge.

Osaka is in the middle of the region, so you can reach most other places by train in an hour or less.

If you have limited time and strategically choose your location, you could just stay in Osaka and easily take trips to Nara, Kyoto, and Kobe.

Putting it all together

Until recently, we hesitated to spend much time there, but now that we have, it’s much better than we expected.

And we have been really amazed by how easy it is to get around the region. We’ve stayed in a number of different neighborhoods and have never needed much more than 1-1:30 to get to either Kyoto or Nara.

So, if you’re looking to explore Japan, don’t overlook Osaka.