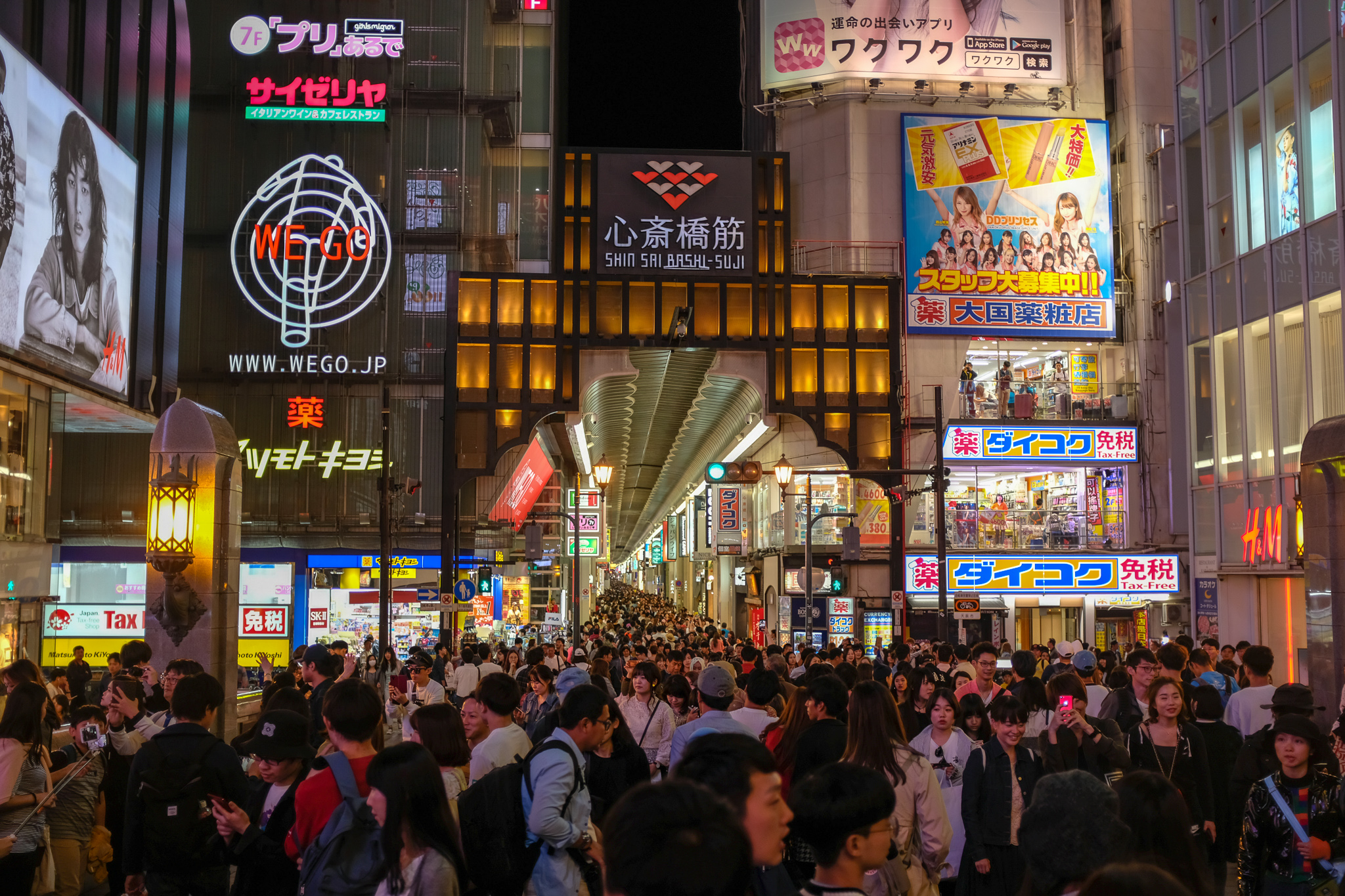 Choosing the best Osaka neighborhood to stay in depends on what you’re looking for.

Osaka is not nearly as big as Tokyo, but it’s still a large, sprawled out city with distinct neighborhoods that have their own quirks and charms. Some are old and have an atmosphere that’s very unique to Osaka, while others are new and modern.

We’ll introduce the major sections of Osaka and give you an idea of what it’s like to stay there. Plus, we’ll look at how easy it is to get to other parts of Osaka and neighboring cities.

(If you want a more comprehensive guide to Japan, our most in-depth article will show you how to plan a two-week trip)

In this article you’ll learn:

North and south are very different

As we’ve spent more time in Osaka, one of our biggest realizations has been how divided north and south are.

These two parts of the city have really different vibes to them and people usually love one or the other.

People from south Osaka love it and never go north. They love the old-school Osaka vibe in most of the neighborhoods and think that the north is less authentic.

People from the north don’t agree, of course, and most of them never go to the south. They usually describe it as old and run down. They prefer the clean, modern design, and sophisticated atmosphere of north Osaka.

North Osaka is primarily a business and transportation district, so you’ll see a lot of business people and office workers on weekdays. But, on nights and weekends it’s mostly young people and families. While there are many different neighborhoods in the north, the three major sections are Shin-Osaka, Umeda, and Kitahama.

Shin-Osaka is where the Shinkansen trains go. There are many hotels and office buildings surrounding the station, plus a lot of residential buildings nearby. The station itself is large and has many famous restaurants and souvenir shops inside. So, you can easily get a last minute souvenir or try a famous local food at the last minute, but beyond that it’s a pretty quiet area.

Osaka station is in Umeda and it’s massive. In fact, it’s one of the biggest in the world. Multiple train stations merge together and are connected by an elaborate underground network of shops and restaurants. The train station is like a city of its own that rises from the underground into skyscrapers above. There are multiple department stores and shopping malls filled with offices mixed with shops and restaurants.

Kitahama is another business area, but it’s also a popular neighborhood to live in. It’s loved by young professionals for it’s cafes and nice restaurants along the river. It has has convenient access to Umeda and is a short walk from many other parts of the city.

South Osaka has a more casual and laid back vibe to it. There are tons of restaurants and bars concentrated in the Namba area, which is known for nightlife. Plus, Namba station is big with a lot of people coming and going. Further south there are a lot of sharp contrasts between different areas. Some of the oldest and most run down parts of the city sit right beside very new sections. There are lots of neighborhoods, but three major areas for most visitors. We’ll introduce Namba, Tennoji, and Tsuruhashi.

Most of the major tourist attractions are in the Namba area. There’s the famous neon glico sign, the Dottonbori nightlife, and lots of street food. There are lots of tourists are all over the area at most times of day, but outside of the central Namba area it’s much less crowded and there aren’t as many tourists.

Tennoji and Shin Sekai are even farther south and also popular with tourists. Shin Sekai is known for it’s street food, but there are also many restaurants clustered together that offer a wide range of foods. This area has a dramatic mixture of new and old. Some streets are old and run down, yet a few block away from brand new commercial areas.

Just west of Namba is Tsuruhashi. It’s still close to the major tourist attractions of Namba, but not as touristy of a neighborhood. It’s right by the largest Koreatown in Japan and has plenty of food options. Plus, it’s well connected to JR and Kintetsu trains so you can easily get to other parts of Osaka and Kansai.

If it’s your first time stay in Namba or Umeda

If you want easy access to nightlife, tourist attractions, and major train stations then choose either Umeda or Namba.

If you stay in Namba, you’ll be within walking distance of the nightlife in Dottonbori and the Kuromon Ichiba Market, where you can try all kinds of local foods. The vibe around here is fun and casual with lots of things to see and do within a very concentrated area.

Umeda has a totally different vibe. There’s also a lot of food options and some nightlife, but you’ll feel the business district vibe the more you get away from Osaka station. It’s also more luxury-oriented with new shopping malls and nice restaurants.

Both have great train access to the region, too.

If you want an upscale business district with gourmet restaurants then you should stay in Umeda. If you’re looking for a casual nightlife district with awesome street food than you’ll love Namba.

While Namba and Umeda have opposite vibes, Shinsaibashi is kind of in the middle.

As you make your way north, Namba’s casual vibe makes its way through a giant shopping area and transitions into Umeda’s business vibe.  The buildings get newer and more upscale, you find a lot of international fashion brands and bigger hotels, plus the crowd gets older.

If you want to be right in the middle of everything with easy access to both the Namba and Umeda areas, Shinsaibashi is where you should stay. You have the option to walk to either area, depending on what you prefer, and there’s easy train access to anywhere else in the city.

Kyobashi is more local but well-connected

While Namba, Umeda, and Shinsaibashi are very central and well-connected, they’re also very touristy. If you want to get more of a feel for the real Osaka that most people live in, you’ll need to venture out a little further.

Kyobashi is a great area because it’s less touristy, but still well connected to the rest of the city. There are great food and nightlife options around Kyobashi station and Osaka castle is about a fifteen-minute walk. Plus, you can easily reach Umeda by train.

This is also a great area to stay in if you want to go to Kyoto. You can get a direct train that only takes about 40 minutes.

Beyond the station, there are large shotengai (covered shopping areas) all around the area. During the day, many local restaurants serve pretty much whatever you want and at night bars and izakaya’s come alive with workers on their way home. We especially like how the area blends old and new together, giving you a more varied taste of Osaka life.

Just keep in mind that less touristy means harder for foreigners to navigate. You won’t find as many English menus and western food (although there is some).

Tennoji is well-connected to the south

Tennoji is kind of a southern area that’s in the midst of a transformation from old to new. There are new shopping malls and large skyscrapers that are a strong contrast to the rest of the area.

The neighboring district, Nishinari, is an older part of Osaka that’s considered kind of run down, but also has a very distinct character going back to its roots as a workers neighborhood. One of Osaka’s most popular street foods, kushikatsu, was invented in the nearby Shinsekai neighborhood. 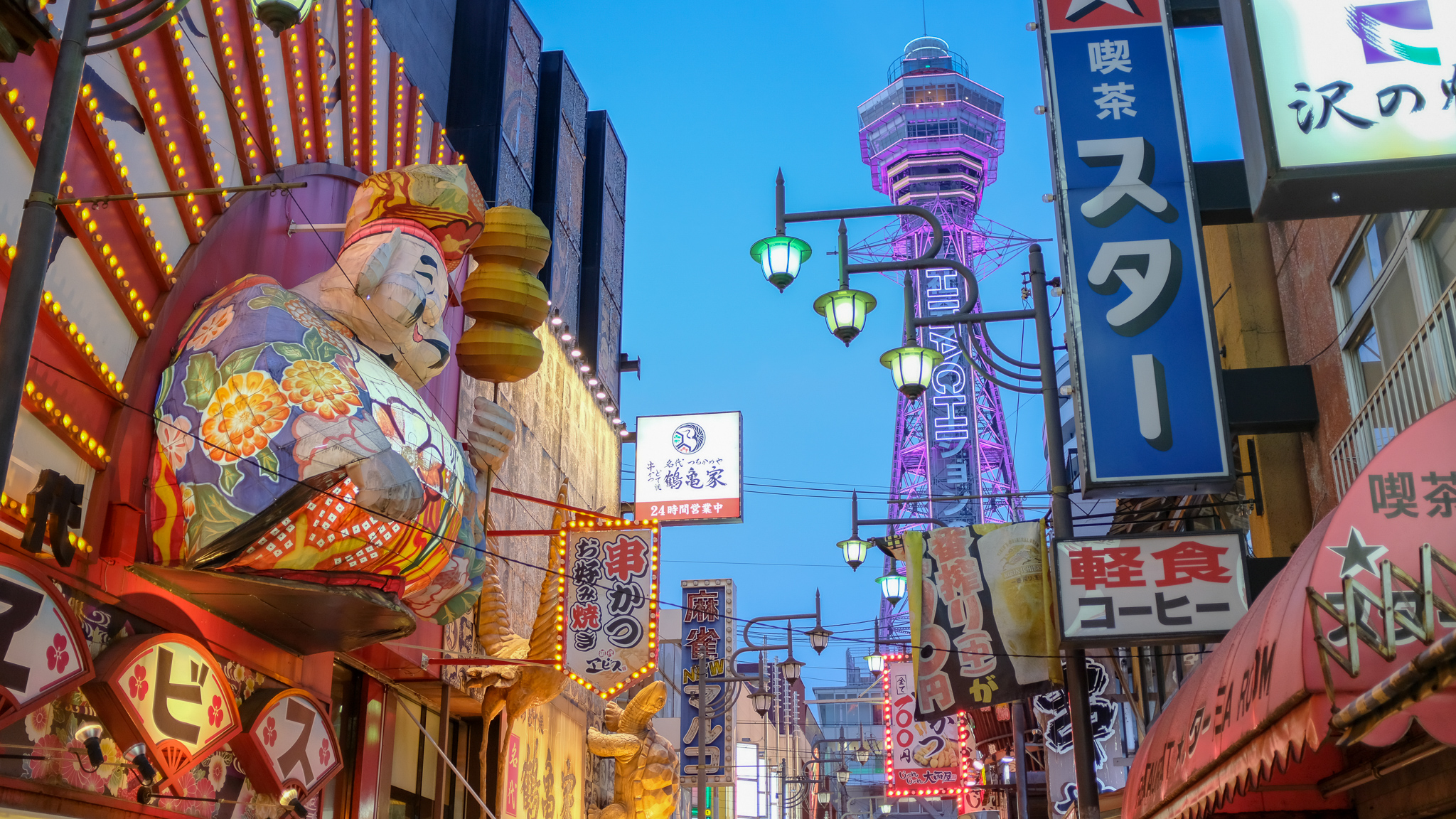 Now this area varies dramatically depending on which way you walk. Tennoji is a modern shopping district that borders the food district of Shinsekai, which is a bit run down, but still a popular tourist attraction. And it also borders Nishinari, which is considered one of the more dangerous parts of Osaka—especially at night.

On the whole, it’s a cool area to explore if you want to see a unique mix of Osaka, but be aware of where you go. It’s also pretty well connected to the rest of the city.

Which Osaka do you want to see?

One of the best parts about Osaka is that you can have an extremely different experience, depending on which area you stay in.

But, you can go north and have a totally different experience. Everything is newer and more upscale, with great dining and shopping. Nightlife is still good, too, just not as much as in Namba.

This introduction should give you an idea of what to expect from each area. While different parts of Osaka have very different vibes, our recommendations will put you right the middle of the best neighborhood for you.