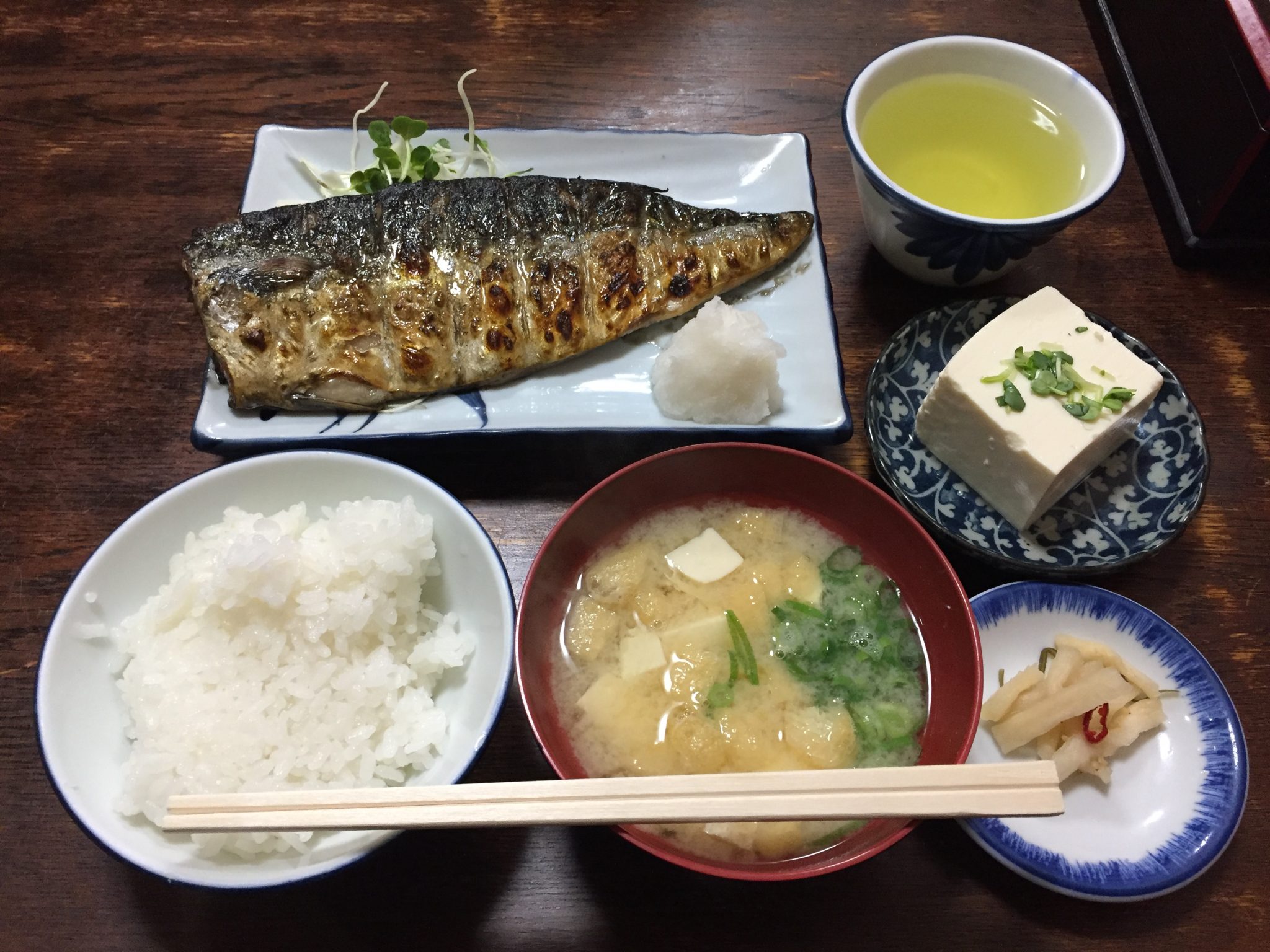 Last Updated on February 17, 2020 by eattalktraveljapan

It happened by chance.

Megumi and I were strolling down one of Fukuoka’s main streets at lunchtime when we saw a mob of office workers briskly making their way down a tiny alleyway nestled between a convenience store and a beautiful shrine.

So, we followed along…

Inside, we found a handful of restaurants catering to this lunch crowd. One restaurant had an especially long line—so long that people were looking from the street and moving on because they didn’t have time to wait.

Upon further investigation, we learned that it was a restaurant specializing in Japanese mackerel (Saba) which had been around for decades. The Japanese review sites were full of claims that it’s the best Saba in Fukuoka.

We knew we had to try it.

So, a few days later we made our way back to the little alley to try it for ourselves…

At lunch time, this place only serves Saba. They have a daily limit and close when they run out. No menu, just the same lunch set for everyone.

We arrived just after the lunch rush, but luckily they hadn’t yet run out of fish (about 20 minutes later they did).

We were led to our seats, which are set up in the traditional way. That means you remove your shoes and then step up to a platform where you sit with legs crossed. This can be uncomfortable so keep that in mind. Also, note that people share tables.

After being seated, we were immediately served Hiyayakko (cold, soft tofu served in warm months) and tea. This turned out to challenge my conception of tofu, too. It’s soft, silky, and mildly sweet. With a little soy sauce on top, I loved it. Additionally, there’s a little plate of Japanese pickles.

Then, we have the main course. An almost full-sized mackerel without many bones.

Finally, they bring a fresh bowl of Miso soup and a side of rice. Inside the soup is a mixture of seaweed, cubed soft tofu, and fried tofu.

Why this Saba blew my mind

The key to this fish being so good here is based on a couple of things.

First, is quality. Mackerel quality varies based on time of year and where it’s from. Mackerel also goes bad quickly, so it’s important to either serve it right away or freeze it.

I assumed it was just really fresh, but Megumi looked into it and we learned that it’s about quality. They buy mackerel during the best season, choose the ideal fish, and freeze them immediately. Then, they ration a specific number to serve each day. This allows them to only serve the best mackerel.

Second, there’s technique. They cook the fish over a charcoal grill which gives a distinct flavor to it. Not to mention the skill of cooking it just right.

Simplicity also helps. They only serve one thing and have done it for decades. This allows them to perfect choosing and storing the fish, as well as their cooking technique. They can monitor how many people are there and time the delivery just right to each table.

The end result is a fish that’s moist, warm, and flavorful. Mackerel always has a strong taste, but this was the first time I ever had it taste so good.The other striking thing was the skin. Rather than being crispy, it was moist and still a little oily. This wasn’t oily in the way a fried food is oily but oily like the oil of the fish.

It happened again… and again

As we continued exploring Fukuoka, we started to notice mackerel nearly everywhere. There were lunch specials being promoted with many different preparations. The supermarket had it in many varieties. Specialty food shops had lots of different canned varieties.

Then, while eating at a yakitori restaurant we got to try another mind blowing mackerel: Goma Saba (Saba sashimi). This is especially rare because mackerel goes bad more quickly than other fish. For sushi to be safe, it has to be really fresh. For this reason, most sushi restaurants cook the outside rather than serving it raw.

Well, the timing was right and the Yakitori restaurant had sashimi as an appetizer. The fish were alive just a few hours earlier, so it was extremely fresh and safe for sashimi. While the other restaurant blew me away by only choosing the best fish, this one only chose the freshest fish.

Why travelers need to try this fish

Mackerel is everywhere in Fukuoka and for good reason. This is one of the best places to get it. While the mackerel was incredible, both of these experiences were about a lot more than the fish. They highlight some cultural differences in Japan compared to many other places.

Coming from the US, to see a restaurant that specializes so precisely is extremely rare. It’s just as rare to have a place go to such great links for the freshest fish. While a few places do this, they are usually fine dining restaurants, yet both of these experiences were in fairly casual restaurants that weren’t terribly expensive.

Yet, this is surprisingly common in Japan. The main reason, at least as I understand it, is that they take the approach of quality over quantity. People devote their lives to a profession and want to provide the best service possible.

In these cases, each place could sell a lot more fish but it would mean lowering the quality. They choose to sell the best fish, rather than the most fish.

So, when you’re in Fukuoka you need to try this fish.